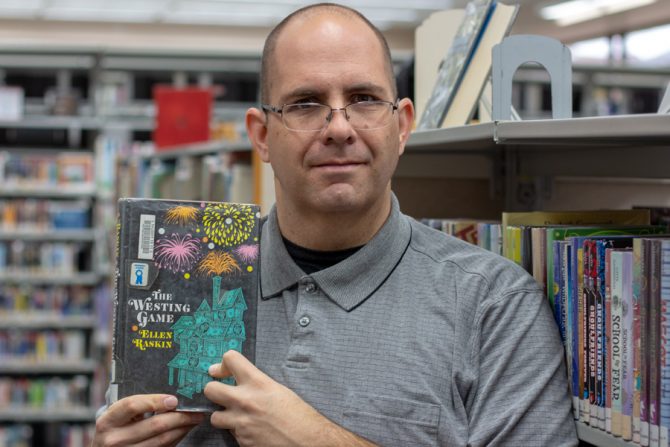 The Westing Game by Ellen Raskin was the book of my sixth grade class. I don’t remember who in our class read it first, but it spread quickly.

It’s a murder mystery in the form of a puzzle, with 16 of the late Sam Westing’s “heirs” (none related to him, but all connected in secret ways) playing in teams to solve the crime and win Westing’s fortune. It was a twisty, clever game with an infinite number of directions to explore, and we couldn’t get enough.

It was also the first time I read young people being treated as peers to adults. There were several teenaged heirs, and they were full players of the game. They weren’t shunted to the side because of their youth, but they also weren’t the only ones who knew anything while the adults bumbled around being idiots. They had their own strategies and ideas and guesses that were just as likely to be right (or probably, wrong) as the grown-ups’.

They also had their own interests and ambitions. Doug was possibly the fastest runner in the state and aspired to Olympic stardom. Angela was the “perfect” but passive daughter, yearning for respect that wasn’t based on her looks. Best of all was Turtle, the ambitious 13-year-old who interpreted the clues as stock tips from her capitalist hero and used the $10,000 given to each team to invest in the stock market.

“Are teenagers even allowed to play the stock market?” sixth-grade me asked.

It didn’t matter. Turtle saw an opportunity and she took it, whether she was allowed to or not. And no, it wasn’t the right answer in the game. But that spirit—of making your best guess at the right path and taking it, without artificial limits like age—is one that I think we could all use a bit more of.