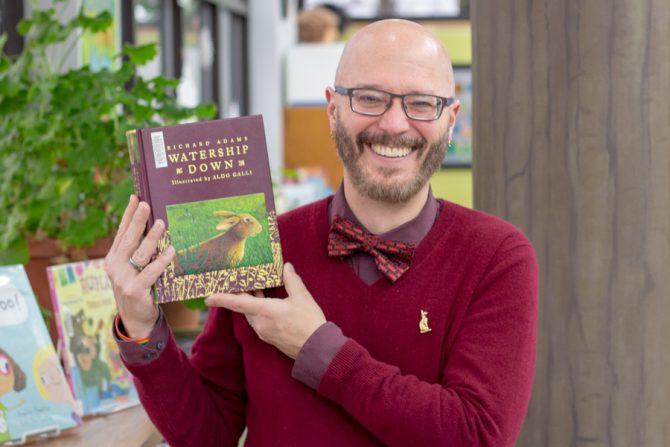 Books children read often stay with them throughout their lives. For Tim, the Head of Youth Services at Beavercreek Community Library, Watership Down was not only a book he loved as a child, but one he enjoys to this day. It’s also the book that inspired him to become a children’s librarian.

“When I was in first or second grade, my dad read it to me and my sisters,” Tim says, although the kids knew he was skipping parts. Before long, Tim wanted to read the book for himself. But when he went to his nearest Dayton Metro Library location, the librarians wouldn’t let him check it out.

Richard Adams’ novel tells the story of a group of rabbits who, fearing destruction of their warren, attempt to find a new home. It's considered a children’s book in England where it was published, but frightening scenes of violence and death led to it being shelved as an adult book at the Dayton library.

Tim soon acquired the book on his own—ironically enough, at a book sale at the library that considered him too young to check it out. He loved it, and still does. “I read or listen to it each year, usually in late summer when the rabbits start showing up in the yard,” he says. “I always find something new in it.”

Meanwhile, the experience of being prevented from getting a book is a large part of why Tim became a librarian. “I don’t want other kids to be denied access to books they were ready and eager to read like I was.”