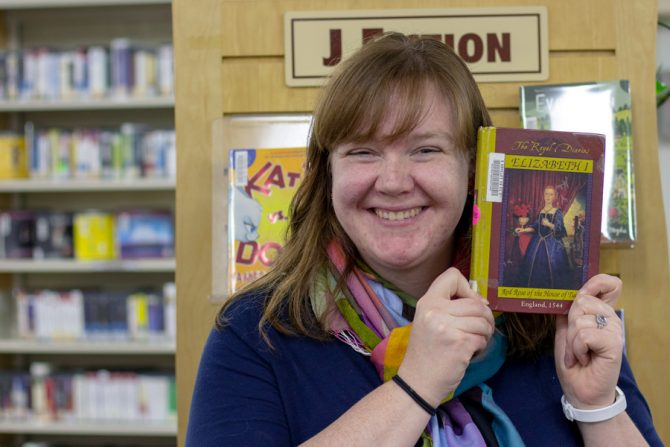 Political intrigue might not be the subject of the average preteen girl’s diary entries, but the average girl isn’t in line to be queen of England. Elizabeth I, Red Rose of the House of Tudor by Kathryn Lasky uses a diary format to show day-to-day life in the Tudor court—and it also turned one reader into a voracious fan of historical fiction.

“I really liked diaries and getting a first-hand view of a story,” says Erin, Adult Services Librarian at Cedarville Community Library. “I liked learning history without having to get it from a textbook.”

Details about young Elizabeth’s education, living conditions, and fraught family relationships all helped bring the past to life. “I already liked the Tudor era when I read this book, and it gave the perspective of a girl about the same age as me,” Erin says. “It felt like Elizabeth was a real person, not just a bunch of facts I learned in school.”

There were other historical fiction books Erin enjoyed as a child, including the Dear America series and American Girl books. But Lasky’s story is the one that led Erin to recognize she was a genuine fan of the genre. It also helped her develop confidence as a reader. Erin moved on to Jane Yolan and Robert Harris’ Queen’s Own Fool, about Elizabeth’s cousin Mary, Queen of Scots. “I remember that it was a book for older kids, but I was able to read it and enjoy it,” Erin says.

Today, Erin is well-read, running both the Greene County Public Library Online Book Club and Cedarville’s Beside the Creek Book Club. But historical fiction is still her favorite—thanks in large part to a book that humanized a future queen.