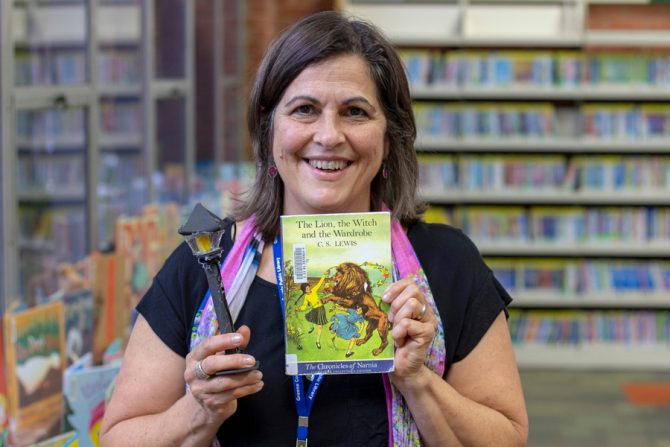 Not reading may be a surprising admission from a librarian. But Janet, a Youth Services Librarian at Yellow Springs Community Library, says she wasn’t a big reader when she was a kid.

“I think it was because no one really directed me to books,” she says. “But as I was entering high school, someone handed me a full set of The Chronicles of Narnia, and I read it right away.”

Janet loved the hopeful story and the fantasy setting of C.S. Lewis’ 7-book series, particularly the introduction to The Lion, the Witch, and the Wardrobe. “I think it’s what every kid loves, the idea of a magical wardrobe that leads to a magical world,” she says.

She also admired Lucy, the youngest of the four Pevensie siblings. “I felt like a loner because my siblings were older, so I played a lot by myself,” Janet says. “Lucy is brave and bold, and she has to go off alone because no one believes her at first.”

The magic has lasted into adulthood. Janet has led Narnia reading clubs for kids at Yellow Springs Community Library, and she’s read the series to her own children as well. Her son had a picture of a ship on his wall, and Janet once asked if he ever thought he might be able to use it to get to Narnia the way Lucy and her brother Edmund did in The Voyage of the Dawn Treader.