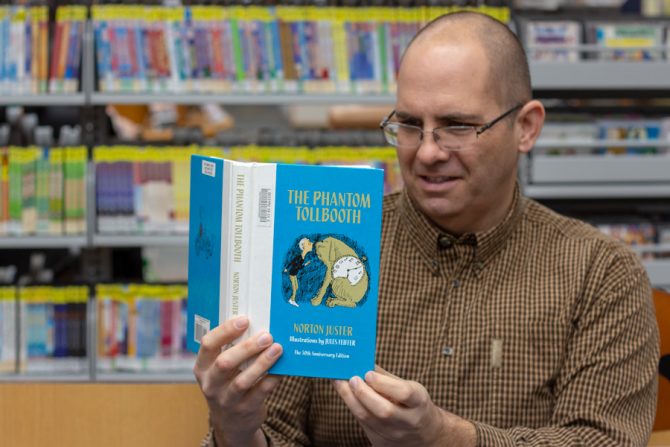 My name is Greg, and I’m the library’s Web Content Specialist. As you might expect, I do most of my work on the computer. But like just about everyone who works at the library, books are an important part of my life as well. In this new series, The Treehouse, my Greene County Public Library colleagues and I will be looking back at some of the books from our childhood and reminiscing about the impact they had.

Norton Juster’s The Phantom Tollbooth  was my first experience with something going viral, although we didn’t have that term at the time.

I can’t remember who read it first in my third-grade class, but they started talking about what an amazing book it was. Within days, the waitlist in our school library was 25 people deep.

In the book, Milo returns home from school to find a magic tollbooth in his room. With nothing better to do, he drives through it and into an epic quest to save the Kingdom of Wisdom.

I wasn’t disappointed when it was finally my turn to read the story. I’d never realized just how playful words and numbers and colors and sounds could be. Along his journey, Milo meets characters like Tock the Watchdog, Faintly Macabre the Which, the twelve-faced Dodecahedron, and Chroma, the conductor whose orchestra plays light.

Milo successfully reconciles the kings of Wisdom’s two major cities, Dictionopolis and Digitopolis. The return of Rhyme and Reason (literally and figuratively) to the Kingdom may be short-lived, however, as the kings are already bickering again as Milo returns to our world.

As unsettling as that somewhat ambiguous ending was, it also meant the quest was ready for someone else to take. After reading the book, I wished that someone would deliver the tollbooth to my house—before realizing, just like Milo did, that there were plenty of adventures I could have without it.