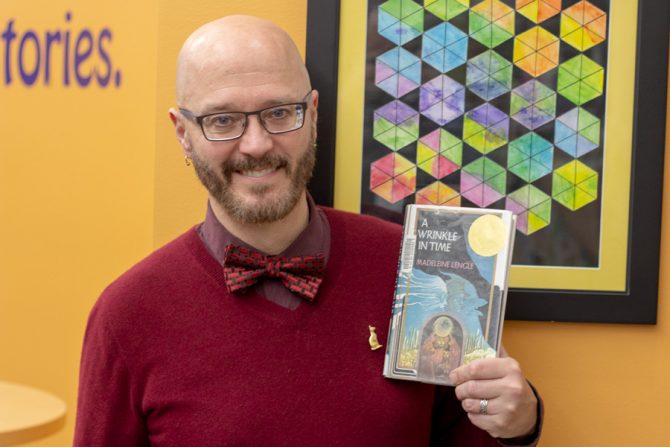 In school, Tim, Head of Youth Services at Beavercreek Community Library, had to do book projects every semester. One of his first was on Madeleine L’Engle’s A Wrinkle in Time. “I loved it so much, I read the two sequels that existed at the time and did book projects for them as well,” he says.

The supernatural classic tells the story of 13-year-old Meg Murry and her family’s use of tesseracts to rescue her father from a distant planet. “I liked the way it can take both spiritual and scientific ideas, and mash them together without conflict,” Tim says.

He was also able to see elements of himself in the novel’s characters—even though that perception changed over time. "Growing up in Kettering schools, I was one of the first students in the gifted program," he says. “When I was a child, I thought of myself as Charles Wallace,” the youngest Murry child who is sometimes too smart for his own good. As a teen, however, he identified more with Meg, who frequently felt like an outcast in her family.

His love for the series has endured, and Tim still reads the books every year, or listens to the audiobooks read by the author. In addition, “I love sharing these books with kids at the library and hearing what they imagine when they read about the ‘witches’ Meg and her family meet.”