Our community has had a library for 90 years! Not long after the towns of Fairfield and Osborn combined to become Fairborn, the Bath Township Library opened in a barbershop on Main Street. Can you picture customers bent over books while getting a haircut? And don’t you suppose the barbers were constantly saying, “Look up! I need to see your bangs!”

That barbershop boasted 500 books! Since then, our community library’s collection has grown significantly, of course. At the end of March, we held close to 108,000 items at Fairborn Community Library, and we regularly access thousands more from our partner libraries in the county, state, and around the country.

Along the way, our location has changed at times. In 1947, the library moved into the YMCA on South Central, but within months, a fire caused serious damage. Temporary library space had to be found in St. Mark’s Lutheran Church, and also in the upper level of a bar on East Main Street. 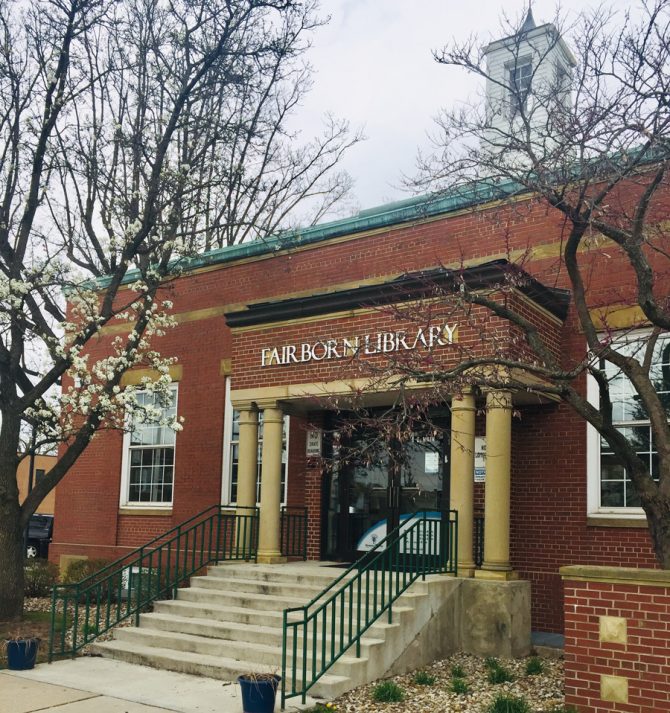 By 1952, a successful bond allowed construction of a new, dedicated library building on North Maple, which was open and ready for readers in 1954. That library was loved and busy, and outgrew its space. So, twenty years later, in 1974, it moved to the main level of our current location. This building was formerly the post office, downtown at the corner of Main and Central. What a perfect location, at the heart of the city!

But we needed more room. So, between 1989 and 1990, the library occupied space in the Skyway Plaza shopping center while construction at the 1 East Main Street building expanded the library to two floors. If you have never visited the lower level of our building, you’re in for a treat. We’ve never seen another library that dedicates roughly half its public space to youth services.

Today, the Fairborn library sits comfortably in the charming downtown district of our host community, surrounded by small businesses and friendly citizens. The City of Fairborn owns the building, and the Greene County Public Library system fills it with materials, staff, services, and programs to meet many interests and needs. Next time you visit, ask a Reference Librarian to show you information about our local history. It is fascinating.