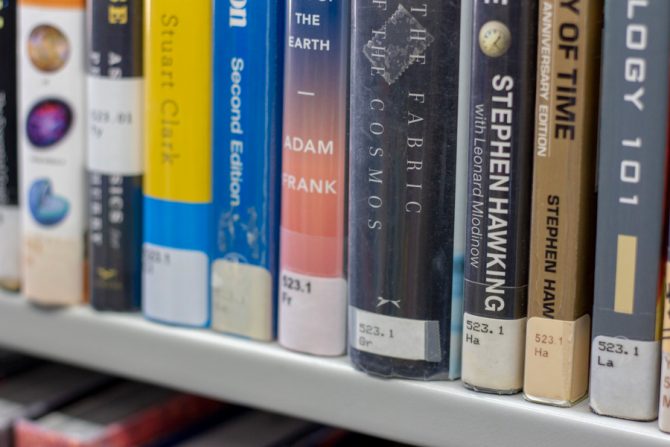 You may have heard the stereotype that librarians are obsessed with the Dewey Decimal System, spending their free time giving call numbers to everything in their kitchen and wearing shirts emblazoned with their own personal Dewey numbers.

But the Dewey Decimal System or DDC (short for its official name, Dewey Decimal Classification) is a useful way to organize a large number of books in a library so they’re easy to find. Each item is assigned a number based on its discipline. The first digit reflects the broadest topic, like social science (3), language (4), or history and geography (9). Each successive digit or series of digits narrows the discipline a bit, or adds details like a location or timeframe.

The number could get looooooong. For example, Stickin’ to the Union, a book about the 2000–01 labor strike at the Canadian agricultural equipment manufacturer Buhler Versatile Inc. would have a 27-digit number!

Fortunately, libraries aren’t obliged to use the whole thing. “We’ll cut the DDC number to an appropriate length before we assign it,” says Tabitha, a substitute librarian who was formerly the library’s Technical Services Manager. “We don’t want patrons to have to write down 15 numbers just to be able to find a book!”

For example, we’ve given Stephen Hawking’s A Brief History of Time the call number 523.1 Ha: 5 for science, 2 for astronomy, 3 for specific celestial bodies and phenomena, 1 for the universe (encompassing space, galaxies, and quasars); and Ha, the first two letters of the author’s last name. We could go further, but that’s enough to let you find the book on our shelves.

* Okay, many library students are tasked with cataloging their kitchens, but that’s a training exercise rather than a hobby. And librarians who compete in sports like roller derby sometimes use the Dewey number of the sport as their uniform number, but that’s just for fun.