Today’s country music scene boasts many leading ladies with powerhouse vocals and incredible stories to tell, but it’s important to remember how much women from the past have shaped the genre. Xenia’s own Real Roots Radio (WBZI) teamed up the Greene County Public library to highlight some amazing women country artists every day this month, with a weekly spotlight on the one and only Dolly Parton. 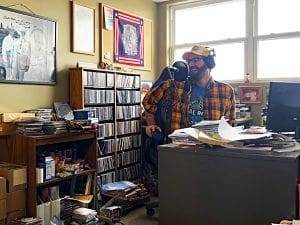 Real Roots Radio, Xenia’s only locally owned and operated radio station, has always been a champion for country music and sharing the country music sound with the Greene County Community. DJ Daniel Mullins compiled this month’s list of women artists and is thrilled to be showcasing them on his show The Daniel Mullins Midday Music Spectacular. A Greene County native, Daniel said that he’s grown up around Real Roots his entire life, as his dad (Joe Mullins) took over the station in 1995, when Daniel was only 4 years old. During high school, Daniel helped around the station, and by the time he was a sophomore in college, he spent his weekends on air doing a show centered around connecting the new roots music he heard in his college dorm with the traditional bluegrass he heard growing up. The rest is history; you can now listen to Daniel every weekday from 10 a.m. to noon.

I had the chance to sit and talk with Daniel about Real Roots Radio and the women of country music.

What excites you about the music you play and the community you’re able to reach here in Greene County and beyond?

I really get excited when folks tell me that they discovered a song or artist that they were previously unaware of, by listening to Real Roots Radio. It is my goal to take listeners on a journey through roots music, past and present. Whether it’s highlighting new artists that are making great music like Charley Crockett or Mike & The Moonpies, or digging deep to showcase a forgotten gem from Johnny Cash or Dolly Parton, I really enjoy getting folks’ ears perked up by hearing something that is new to them. It has always been a goal of mine as well to use roots music to build bridges. We are all more alike than different, and nothing highlights that like the universal language of music.

Why do you think it’s important to spotlight the work and music that women have done in the country music scene?

It’s not just important – it’s vital! Since the beginning, women have played a huge role in shaping country music. Their voices and songs help paint a fuller, richer, and more vibrant history of country music. Country music is at its best when it covers all aspects of the human condition, and a big part of what it means to be human is dealing with sadness and loss, struggling to get by, and dealing with troubles that you feel no one else can relate to. With the power of music, especially something that pulls on the heartstrings like country music, we call all can gain a better understanding of what women deal with, and women can connect with a song or artist that reaches them on a personal level during their life. That’s the power of real country music.

Who are some of the lesser-known artists that you’re excited to feature this month? Why did you pick them?

This month, I am trying to showcase a wide variety of women in country and roots music. I will be covering household names like Loretta Lynn and Reba McEntire, bluegrass stars like Rhonda Vincent and Alison Krauss, and several artists with which many folks may not be as familiar with. One of those artists is Patsy Montana. She was a huge radio star in Chicago during the Depression on WLS’s National Barn Dance. Her song, “I Wanna Be A Cowboy’s Sweetheart” was the first million-selling country song by a female artist. It was an absolute smash hit back in 1935!

It's Dolly’s World, We All Just Live in it

Here at the library, it’s no secret that we love Dolly! Her Imagination Library has changed the game for so many young children on their path to literacy. Daniel and I chatted some more about Dolly and what she means to the country music community.

What is it about Dolly Parton’s music that you think has resonated with us for so long? 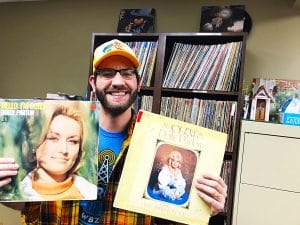 First of all, there is NO ONE like Dolly Parton. She broke the mold in every way. Her talent as a singer, songwriter, actress, businesswoman, philanthropist, etc., is simply hard to fathom! Heck, the Moderna vaccine I had put in my arm last spring so I could safely celebrate my wedding with friends in family is due to Dolly!

One of the biggest reasons Dolly’s music has touched so many of us for so long is due to her honesty and sincerity. She has that rare ability to speak to you directly on a personal level. I have seen her in concert twice – most recently in 2016 in Cincinnati. When she is speaking or singing, you honestly feel that she is communicating with only YOU! It’s so hard to explain, but even in a crowd of thousands and thousands of people, you just feel like your ol’ pal Dolly is talking to you from across the kitchen table.

Tune into WBZI Real Roots Radio weekdays 10 a.m. to noon for The Daniel Mullins Midday Music Spectacular, and make sure to listen on Wednesdays to hear GCPL’s Head of Youth Services Kim Bautz chime in on all things Dolly and the Imagination Library!