Most Jamestown Community Library patrons are regulars and familiar with our location in the west side of the Jamestown Municipal Building, located at 86 Seaman Drive. Through the years, the fact that our municipal building is a duplex with two addresses has in itself led to confusion, especially for mail carriers and package delivery services. The Village offices, located in the east side of the municipal building, are at 84 Seaman Drive. Thankfully, it’s usually not a problem sorting out this type of confusion. Recently the Village posted prominent numbers on the front façade of the building above each entryway which goes a long way toward clarifying our correct address.

Directing someone to our library from out of town has been an even bigger challenge. In recent years, smartphone apps and GPS units have improved this situation for our librarians and patrons. A call for directions to our service desk traditionally goes something like this:

Librarian: Jamestown Community Library, how may I help you?

Caller: Yes, where is your library located?

Librarian: Which direction are you coming from?

Librarian: Are you familiar with Old Route 35?

Librarian: If you’re coming from Xenia, take Route 35 east to the first Jamestown exit, turn right off the exit and you’ll be on Old Route 35, and in about a mile you’ll come into town. When you get to town you’ll still be on Old 35, but at that point it’s called West Washington Street. Look for a McDonald’s on your right, keep going until you see an old gas station which is now an ice cream shop called Swifty’s. Turn right at Seaman Drive. Follow Seaman Drive as it curves around to the right, into a strip plaza. We are in the west side of the Village building, behind Swifty’s.

However convoluted that may sound, we are (usually) successful in directing people to our library with some combination of directions involving McDonald’s, Uhl’s Supermarket, Swifty’s Ice Cream, the stoplight at the intersection of Routes 35 and 72 in the center of town, etc… It’s somewhat easier when the patron has a smartphone or GPS.

To alleviate some of the confusion, the library purchased two “Library” directional street signs, and with the help and permission of the Village of Jamestown, had the signs posted at the intersection of Seaman Drive and West Washington Street. Thankfully, Washington Street (don’t forget, that’s Old Route 35) is the main east / west street through town. That means if we can get you onto Washington Street from one direction or the other, you’ll more than likely see the blue signs directing you onto Seaman Drive. 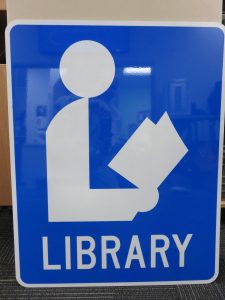 All of this has me looking into the “internationally recognized” library symbol of the silhouetted reader holding a book. I’ve been familiar with it for many years even though Jamestown never had one posted, to the best of my knowledge. I’ve always wondered about its origin. Back in the early 1970s, the Federal Highway Administration began to incorporate more and more symbols and less explanatory text on road signs, and with good reason. According to the Manual on Uniform Traffic Control Devices governing the standardization of highway signage: “Roadway signs in the United States increasingly use symbols rather than words to convey their message. Symbols provide instant communication with roadway users, overcome language barriers, and are becoming standard for traffic control devices throughout the world. Familiarity with symbols on traffic signs is important for every road user in order to maintain the safety and efficiency of our transportation facilities.”

So where did this symbol originate? According to the American Library Association (ALA) the library sign was designed by Ralph Devore of the Western Maryland Regional Library System in 1978.

Following a recommendation by the White House Conference on Library Services in 1979 to “increase public awareness,” the ALA President’s Task Force in 1982 adopted a “Resolution to Endorse a National Library Symbol, opens a new window,” choosing Mr. Devore’s design.

While the image of the original design displayed on the Western Maryland page appears to depict a brown sign, those of you familiar with the design will note that the signs are most often blue or green, with the silhouetted reader in white. This is in compliance with federal regulations governed by the U.S. Department of Transportation as outlined in the Manual on Uniform Traffic Control Devices for signage along the nation’s highways. The manual specifies the color, reflectivity, acceptable sizes, and recommendations for placement governed by local jurisdictions. This same manual designates blue highway signs as being used to indicate “services” and green signs as “informational.” Either category of signs may be accompanied by a directional arrow. Did you know that this same manual includes a similar blue sign depicting a laptop computer with an antenna symbol to indicate the availability of wireless access?

So, whether you’re driving along Washington Street, in the cities and villages of Greene County, or anywhere else throughout our country, take note of the International Library Symbol pointing the way to your nearest public library.