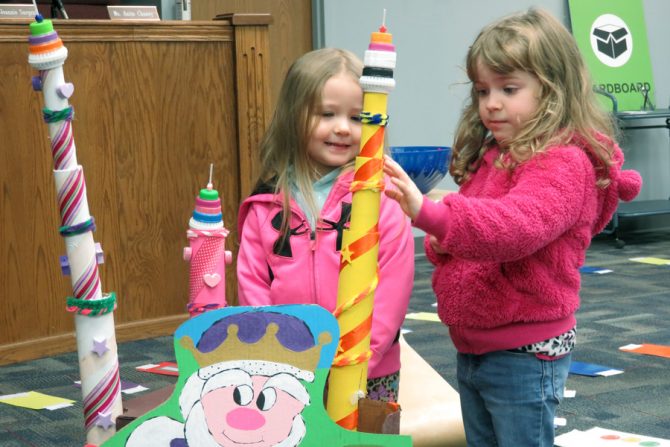 On December 7th, kids can play Candy Land on a life-sized game board at Jamestown Community Library. Join us for a fun-filled trip to the Candy Castle in the classic board game for young children made large, and learn more about the interesting history of the game below. 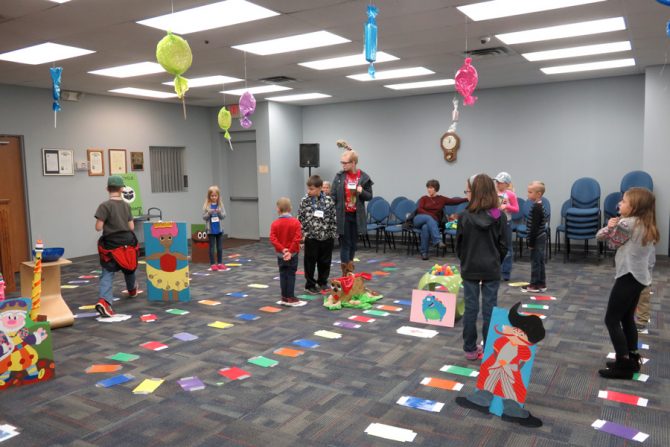 Each year, kids at the Jamestown library get a chance to play Candy Land on a life-sized game board. Our version of the game was put together by the Youth Services department at Xenia Community Library.

It’s always been popular here, and we usually feature it on the Saturday of Jamestown’s Small Town Christmas. We set up the Greene County Public Library version of the game in the Village meeting room with the help of our student volunteers.

The original board game is said to be the all-time bestselling game for young children, and was first sold by Milton Bradley in 1949.

Doing a web search on Candy Land reveals the game’s interesting origin and cultural history, which begins in the 1940s. According to the National Toy Hall of Fame, which inducted the game in 2005, Candy Land was created by Eleanor Abbott. A schoolteacher from San Diego, Ms. Abbott also suffered from polio. Her intention was to find ways for recuperating children to pass the time, and Candy Land became her greatest success. It’s easy to see how children confined to a hospital ward would take to a game set in a fantasy world of candy. In 1948 she was urged to market the game and sold the rights to the Milton Bradley Company, now a subsidiary of Hasbro. Apparently, not all that much is known about Ms. Abbott. One article reports that checking with the San Diego Historical Society yielded nothing but an old San Diego phone book listing.

The game itself is a simple one, which makes it accessible to very young children. Any child who has learned color recognition can play, as moves are determined by drawing a color-coded card and moving to that color following the path to the Candy Castle. Called “Home Sweet Home” in the original version of the game, the first player to reach the Candy Castle wins. Along the way, children might encounter various characters such as Princess Lolly, Queen Frostine, Lord Licorice, and Gloppy. Candy Land can provide one of a child’s first experiences with following rules and taking turns, as well as winning and losing. It is loved by young children who can play a game along with older kids and adults. Reading more about the game online reveals the frustrations of some adults who wish the game wasn’t quite so popular with their children. Children don’t realize what the adults do… that the winner is determined by the pack of cards, there is no strategy, and there is nothing they can do to change the outcome. But to children learning the game, none of that matters. The usual internet sour grapes notwithstanding, Ms. Abbott’s game has become a classic and certainly succeeds in giving the youngest children a game they can play and pass the time.

Looking back to 1948 and Eleanor Abbott’s reason for creating the game, one is quickly brought face to face with the realities of the times. The United States had emerged victorious from the Second World War, the baby boom had begun, and the economy had recovered from the post war readjustment. However, 1948 witnessed one of the largest outbreaks of poliomyelitis in our history, and 1952 was even worse. According to Wikipedia, there were 58,000 reported cases that year causing 3,145 deaths, and 21,269 cases of mild to severe paralysis. The severest form of the disease, paralytic poliomyelitis, attacks the spine and muscles and can take away a person’s ability to walk or even breathe. Victims of the disease, mostly children, were kept in hospital wards while they recovered. The most severely paralyzed were destined to spend their lives inside an iron lung, a machine that forces the body’s respiratory system to work. Parents were urged to keep their children indoors during polio outbreaks, and public parks and swimming pools were closed. In 1939, Franklin D. Roosevelt created the National Foundation for Infantile Paralysis (today the March of Dimes) to fight the disease. In 1955 Dr. Jonas Salk, working through the foundation, produced an effective vaccine against the disease. Largely eradicated in the United States, polio remains a scourge in some countries. The World Health Organization seeks complete eradication of the disease by 2023.